After going through Yosemite and crossing the Sierra Nevada, the landscape become much more arid and desertic, it’s because the mountains stops the humid air coming from the ocean.

Sitting between the mountains at 2000 m, just after Yosemite, is Mono Lake, a really special lake on many aspect :

Mono Lake water feels sick and slippery when you touch it, a bit like salty soapy water. You could reproduce the same thing by mixing water with salt and baking powder. Because of this “thickness”, the surface is really flat, almost undisturbed by wind.

An other exceptional phenomenon happens in this lake. Fresh water run down underground from the mountains, go through volcanic rocks and get loaded with calcium. When it arrives in the carbonate-rich lake water, a chemical reaction happens : it precipitates in calcium carbonate, also known as limestone. It result in strangely shaped towers, now visible as the lake level as dropped by several meters. Those formations are called tufa.

The lake also have a unique biodiversity. It has a lot (really a lot) of flies “Akali Flies” who like alkaline water (and they are the best flies I’ve met : they fly away from you when you approach). Mono Lake also have its really own really small shrimp species, the Brine Shrimp. 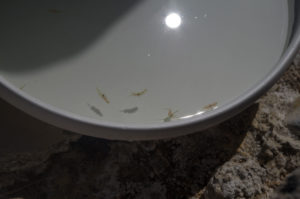 Those abundant flies and shrimps make the lake a paradise for birds, several species stop there as a rest in their migration.